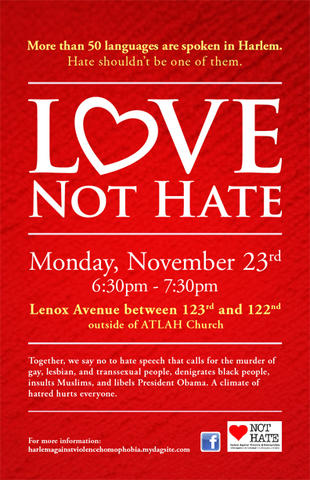 HARLEM, NEW YORK – The sign once read: “Jesus Would Stone Homos.” Now it says: “You Sodomites and Freaks Have Soiled Harlem.” Frustrated by years of hateful language posted on signage outside of Atlah Worldwide Missionary Church, Harlem neighbors will hold a rally against hate speech on Monday, November 23rd, 2015 outside of 38 W. 123 St. at Lenox Ave.

Malicious language is visible daily on signage in front of the church. Over the past several years, ATLAH has posted messages that denigrate black people, insult Muslims, libel President Obama and other leaders, and now often call for the murder of gay, lesbian, and transgender people.

“In this day, and in our Village- one of diversity, one of worldwide cultural significance- there is no room for such vile discrimination. The messages displayed by the ATLAH Church are not reflective of this community, but are grossly offensive hate speech that have no place in the streets of Harlem. Today, humankind finds itself surrounded by the tragedies of war. In upper Manhattan and abroad, we are crippled by problems of inequality. Record-high debt is ensconcing countries, communities, families and individuals. There is no time or attention left to spend spreading a message of bigotry. Today, the truest members of the Harlem community ‎are speaking up and we reject this display of hatred by ATLAH Church" said Assemblyman Keith Wright.

"We will continue to demand respect and reject the hate," said Jennifer Louise Lopez, executive director of Everything Transgender in NYC (ETNYC) who in 2014 approached the church with a video camera asking for her stoning--in direct response to the initial "Jesus Would Stone Homos" sign. She was met by uncertain looks, but her video soon went viral.

“We want a neighborhood safe and welcoming for all,” said Harlem resident Stacy Parker Le Melle, organizer for Harlem Against Violence, Homophobia and Transphobia, the community group comprised of local residents working together to resist ATLAH’s hate speech. “We understand ATLAH has a right to free speech, but this kind of messaging can incite violence in a city where assaults on gay, lesbian and transgender people in particular is on the rise.”

According to the National Coalition of Anti-Violence Programs, there was an 11% increase in anti-LGBTQ homicides in 2014. That, Le Melle and her neighbors insisted, is unacceptable.

"We have to stand up to bullies and demagogues, especially when they're preaching hate in the heart of our neighborhood," said Le Melle. "There's too much at stake.  Whether it's Donald Trump calling for mass deportations and mass registrations, or James David Manning calling followers to push gay people off roofs, these violent words must be countered. On Monday, we will do just that."

The Harlem SBL/LGBTQ Coalition has offered this statement of support:

"As a coalition of Harlem based SGL/LGBTQ organizations, we have unified to define, speak, and act for ourselves, rather than accept the efforts of others to define, speak, and act on our behalf.   We have and will continue to join in the condemnation of the messages displayed on the sign outside of the Atlah "Church". These messages have been vile, hateful, homophobic, transphobic, sexist, racist, and much more.   Such hatred has no place in our community. Thus, we are in support of the "Love Not Hate" event that will take place outside of the Atlah "Church" on Monday Nov. 23rd @ 6:30 PM - at the corner of W. 123rd Street and Lenox Avenue. We invite all to stand with us. United against hate. United for our community.   We thank Assemblyman Keith Wright and his staff for his successful efforts toward bringing different parts of our community together on this most important issue. We stand united, and pray together for an end to this hatred.  LOVE NOT HATE."

History: Harlem Against Violence, Homophobia, and Transphobia began organizing in March 2014 when ATLAH posted language suggesting that Jesus Christ condoned stoning of LGBTQ people, a violent escalation of a long-running series of bigoted and hateful messages. After several attempts by community members to talk with church leaders failed to halt the violent language, Le Melle and her neighbors responded by working with other neighborhood organizations to raise money for the Ali Forney Center for homeless LGBTQ youth and reaching out to elected officials. A number of block associations from the surrounding area have joined the coalition of people working to end this violence in the community.

Details: More than 50 languages are spoken in Harlem. Hate shouldn't be one of them.

Together, we say no to hate speech. A climate of hatred hurts everyone.