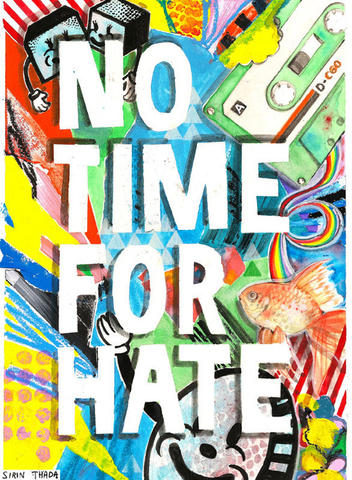 When I heard about No Time for Hate: A Benefit Night for the Ali Forney Center, I thought WOW what a fabulous idea. Like many people who live and work and visit Harlem, I had passed the large sign on Lenox Avenue that proclaimed: "Jesus would stone homos... stoning is still the law." Doing so left me each time feeling stunned and uncomfortable. I wanted to do something, but I felt afraid and also unsure. What should I do exactly and to whom could I express how I felt.

When my children asked me what stoning meant, the magnitude of the violence intensified for me. I heard myself explaining that stoning meant a group of people collectively kill a person, that it is an act designed specifically so no one person can be identified as having thrown the stone that caused the final blow and death. I found myself having to reassure my children. "The person who wrote the message is confused," I told them.  "Stoning is not legal in America."

There are many skilled and caring teachers at my children's schools who are representatives from the LGBT  community. So my children were aware of what the derogatory word 'homo' meant when used in the sign. It was difficult for me to share with my children the idea that someone hates and wishes a slow torturous death for people who, in our experience, are role models of thoughtfulness and live peacefully with their neighbours. "The person who wrote this message is confused," I repeated.

For these very personal reasons I felt so happy to learn about Stacy Parker Le Melle's initiative to raise support for the Ali Forney Center. The consequences of thoughtless and hurtful messages posted in public spaces where too many homeless LGBT are forced to survive without appropriate support or services, affects my children as well. "Why does that kid have nowhere to sleep at night."

I have been thrilled to watch the remarkable "No Time For Hate" event grow into a reality. The event brings greater awareness of the immense challenges endured by homeless LGBT youth and those working to raise their quality of life. My family wishes for each and every one of the kids to have a safe and peaceful place to live and grow up in as they reach for their adulthood.


I'm involved in the No Time for Hate campaign because I have No Time for Bullies.  As a native of Harlem and new mother I know it's not enough to be disappointed in the negativity I see in my community and that change requires action.  I'm so proud to be a part of the efforts being produced by the parents of Harlem4kids.